Brian Evans has many important duties in his role as a Police Lieutenant and Traffic Services Coordinator in the Patrol Division of the Knoxville Police Department. With approximately 50 people assigned to his unit, Brian oversees Knoxville’s Motorcycle and Criminal Interdiction Units, fatal crash and hit and run investigations, automated camera enforcement program, special event and construction road closures, and school crossing guard program.

While Brian has been a police officer for over 25 years, it was earning his Master of Science in Criminal Justice at South College in 2012 that largely prepared him for this leadership position.

“Not only has the degree provided an opportunity for advancement, it has prepared me with the knowledge and skills needed to be successful. In addition to police work, my degree has opened doors for consulting work, private security work, and teaching on a college level,” says Brian, who is now also an Adjunct Instructor of Criminal Justice at South College.

In his role with the police department, Brian’s days include working closely with many city departments, community leaders, and event organizers. “My main function is to plan and implement programs that reduce crashes and save lives,” he explains. “In 2018, over 11,000 traffic crashes took place in Knoxville. My job is to evaluate those crashes and implement plans to reduce those crashes through education, engineering, and enforcement.” 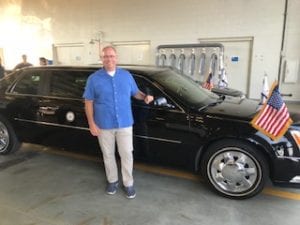 A significant portion of Brian’s time also goes toward planning traffic flow and safety precautions for special events. In 2018 alone, Knoxville hosted 42 races requiring street closures, 13 parades, 7 University of Tennessee home football games, The National Honda Wingding Motorcycle Convention, and the USA Cycling National Championships. Each event has its own unique constraints and issues that must be planned for and addressed. “There is no one plan that you can use for all special events,” he explains.

Similarly, Brian has helped in preparing for visits from government leaders, including the President and Vice President of the United States, Speaker of the House, Senate Majority Leader, and FBI Director.

“While most of my time is spent on the planning side of the desk, I enjoy working the events just as much,” he says. “It is fulfilling to develop a plan, see the plan implemented, and take pride in the successes or learn from the mistakes.”

For Brian, his passion for police work is driven by a love of problem-solving and people. When asked about Knoxville, he talks about the area’s lakes, parks, and proximity to the mountains. He promotes the city’s active downtown district. His favorite thing, however, is the people.

“The people of Knoxville are kind, they work hard, and appreciate the small things in life. They are loyal to their family and friends. They are proud of their town and treat everyone like family,” he says.

Brian has a few more years left of serving the people and city he cares deeply for before retiring.

“I hope to have the opportunity to advance within the department and share my experiences with the younger officers we are hiring. I want to take the knowledge and experience I have gained over the past 25+ years and be part of a team that leads our department into the future,” he states. “We have a group of awesome men and women who make up the Knoxville Police Department. My goal is to make a difference, regardless of how large or small, at the Knoxville Police Department and to leave this place a little better for them and the citizens of Knoxville.”

He attributes his ability to do exactly that in part to his education from South College. “Policing is very complex. To be successful, officers must constantly learn new ways of doing things,” he says. “South College provided the opportunity for me to learn from the past so that I can be a part of how the future is changed.”

Want to join Brian in shaping the future of criminal justice? Start or continue your education in Criminal Justice at South College.